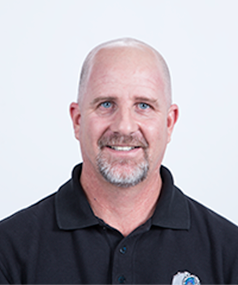 Blair Mott began his professional diving career at 18 years of age, as a NAUI Open Water SCUBA Instructor. After 14 months of working in the West Indies he returned to Santa Barbara where he completed his Associate of Science degree in Marine Technology from the Marine Diving Technology Program at Santa Barbara City College. While training and studying he was able to work for a few different local companies where he first was able to get wet as a commercial diver.

Upon graduation, he earned a position with Passage International (a Jean-Michel Cousteau partnership) and Passage Productions. Besides camera operation, on-camera talent, and technical support, Blair was given the responsibility of Passage Team Leader in the Red Sea, the Mediterranean and the South Pacific territories. After his experience with Passage he returned to Santa Barbara and obtained a seat on the Board of Directors for the Historical Diving Society USA.
In 1997 he completed his training for his Semi-Closed Rebreather (SCR) certification and began pursuing professional qualifications in Technical Diving; which would include his certification and Instructor ratings in nitrox, gas blending, decompression procedures, extended range, closed circuit rebreather (CCR) and mixed gas closed circuit rebreather (CCR).

Soon following Blair began a two and half-year commitment with an Ocean Futures Society project that took place in Iceland. During this time he held dual roles as Dive Coordinator and Director of Archives. During his assignment in Iceland, Blair saw to the repair & constant maintenance of the 250 foot x 100 foot floating bay pen; which was instrumental in the study and eventual reintroduction of Keiko the Killer Whale into the wild.
His work regularly took place in the 32 degree Fahrenheit water securing and rigging 10 ton anchors, using a hydraulic rock hammer, daily inspections and maintenance on the baypen that used a unique pretension mooring system.

Spring 2001 Blair began another project that would last until August 2007. It would be the success of completing eight episodes for the Public Broadcasting System (PBS) as the Chief Diver for Jean Michel Cousteau’s Ocean Futures Society. This series would expand Blair’s diving experience and test his ability as the Chief Diver in a variety of environmental conditions and diving equipment configurations. From the warm South Pacific to the historical depths of the iron clad USS Monitor he was a key team member for the entire series.

After the series Blair worked on various projects as the product specialists for Force Fin and went back to the commercial diving field full time, working both inland and offshore before acquiring his current position as the Dive Training Manager at the Kirby Morgan Pro Dive Center.